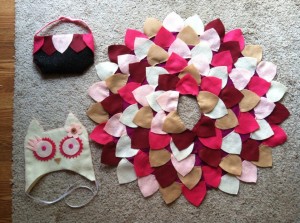 So, I want to do a FULL disclosure. I found this costume through Pinterest and I fell in love! (see below for original post. Please keep reading for my additions!)

I followed her instructions for the most part, but I am a pretty crafty person so I made a few changes. Instead of felt for the cape, I used some cotton fabric in a bright magenta. When it came to cutting out the actual cape, I had to improvise. I looked all around the house for something to trace and Ta-Da! I used the base of Soph’s bouncer! (Note: you can find any shape you want by just looking around your house. I have used everything from a DVD box, to a hamper base, to my martini glasses.) I cut a stencil from a paper plate and used that to trace the feathers. I was able to get about 9 feathers per sheet of felt. And because I am a glutton for punishment, I decided to sew on all of the feathers. Now don’t get me wrong, I love sewing and it is very theraputic for me, but this took over an hour or two to sew them all on. Like Lindsey suggested, you can hot glue them too.

When it came to making the tie, Lindsey used a ribbon. Having a toddler who loves all strings = not gonna happen. So, I sewed on a button instead and cut a botton hole. (Note: reinforce the button hole by sewing embroidery thread around the hole!) I hid it under a feather, so you can’t even notice it. 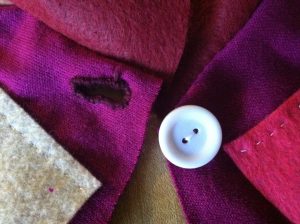 For the hat, I guessed on the fit too because Sophie was asleep when I decided to tackle it, and we all know you do not disturb a sleeping baby! I used a marker to freehand the ears and then cut them out. The two pieces of felt that I used were just wide enough (on the short side) to sew together and fit perfectly on her head! Instead of flipping it inside out, I liked the stitching so much that I left it that way. I used a cup to trace the center part of the eye and a martini glass for the outer part of the eye. I freehanded the eye lash, flower, and nose. I would recommend using pinking shears for the outer part of the eye, but I did not have any so I just cut it on my own. I sewed on the buttons for the eyes and flower, but hot glued the rest. 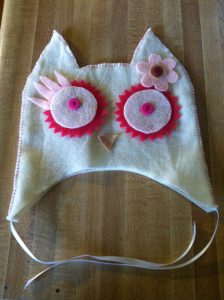 Now, I know I said that a ribbon was not going to fly for the cape, but I needed something to tie the hat on because she kept ripping it off. So, I sewed on the ribbons praying that she would not untie them once the hat was on. Luckily, she is leaving them alone *knock on wood!*

Lastly, I added my own little flare to the ensemble and made a treat bag! Too Easy. I just bought a sparkly piece of black fabric and folded it in half!I tucked the corners in for a little more shape and sewed the edges together in the same stitch I used on the hat. I used embroidery thread on the bag instead of regular thread to give it a little more detail. (OK I lied. I lost the thread I used on the hat and then decided to use embroidery thread!) I used 8 extra feathers from the cape to add to the top. I was a little overzealous cutting out the feathers and I had a bunch left over. I may even sew a few more together on a sock to show over her boots. I used the extra scraps from the feathers to make the handle (sewed that on). 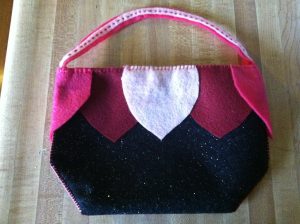 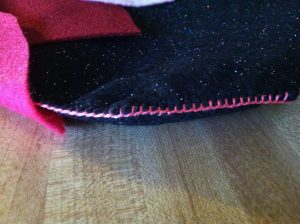 All in all, this costume only cost about $10. No, I am not lying. I bought 30 pieces of felt for 34 cents a piece. I had the cape fabric, buttons, and thread already. If you had to buy those, it may cost you an extra $2 or $3. Still, that is a steal compared to the $25+ you would pay for a brand new costume! 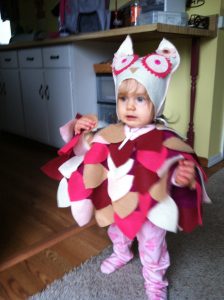 (This is the best picture I could get of Sophie- she kept walking around and appropriately flapping her arms!)

My best piece of advice for this costume is don’t be afraid! It was a very simple costume and I think it turned out great! Thank you to Lindsey again for being my inspiration!

***Here is the link to the original blog for instructions: http://martinfamilytimes.blogspot.com/2011/12/owl-costume-semi-instructions.html***