Universal Worldwide Conspiracy for Mommy to Not Sleep 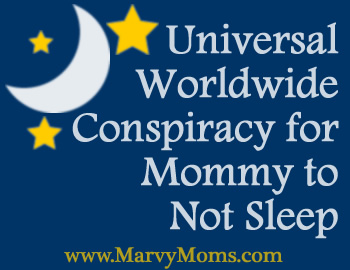 Let me start by saying how much I L.O.V.E. to sleep. I love to sleep!  As a kid I could easily sleep until noon or later, and napped every day with my dad for an hour or more. As an adult, there were a few years when I worked a 9-5 job and didn’t have a nap, but most days of my life I take a nap as well as getting a full night’s sleep. I had mono as a teenager and realized that without enough sleep I get sick, so I do my best to get enough sleep. I LOVE sleep! Did I mention that I love sleep?

When I was pregnant with JW, everyone who was ever a parent felt it was their duty to warn me to “Sleep now while you can.” My response was always, “I’m not sleeping now as it is since I’m up five times a night to pee. What’s the difference?” I’m here to tell you that there is a difference! When the baby was in my belly, I got up with my eyes closed, marched into the bathroom, peed, and did a zombie walk back into bed. I may have gotten up five times a night, but was never fully awake.

That all changes when the baby comes out of the belly and is screaming in their crib or in your arms. I nursed JW, so I was up every couple of hours just to nurse him. I’d let him cry for a minute while I went potty, and then picked him up and nursed him in the rocker/recliner, and usually passed out in the chair. By the time I woke up to put him back in his crib, the whole thing started over again.

Then we moved to a new house and had him in a pack ‘n play in our room until we were ready to put him in his new room. Then around Christmas of 2011 we all got sick and I was so tired that I would do anything to go to sleep. JW was up every half hour or so crying and wanting to nurse and I was exhausted to the point that I finally just left him in the bed with us so I didn’t have to get up one more time to help him. I quickly discovered that if he was in the bed, he slept through the night! So, we all got better, but JW stayed in the bed with us because it was so nice to finally sleep through the night. When I was finally ready to put him back in his crib, he would have nothing of it. Within two weeks we had become accidental co-sleepers.

Over a year later, and we were still all sleeping in the bed. JW was much bigger a year later, and sleeping through the night had become more and more difficult. My husband developed shoulder pain because he had been relegated to sleeping on “8 inches of the bed.” It got so bad at one point that he needed to have a cortisone shot to deal with the pain, and was considering surgery if that didn’t do the trick. In order to keep JW from being crushed by Daddy, I kept my arm under him so I could protect him if one of them rolled too far into the other. My shoulder wasn’t doing so well either.

I haven’t even mentioned yet that Baxter, our 12-year-old Bichon Frise, also sleeps in the bed with us. Late last year he took to jumping out of the bed in the middle of the night to go outside to pee. At one point he was doing this 2-3+ times per night. I finally took him to the vet and we discovered that he’s diabetic.

A couple of months ago we decided it was time for JW to get his own big-boy bed. I’ll write a separate post one day about how we made the transition, but let me just say all was going well until a month ago when he got sick. Even with snot dripping down his face he slept through the night, until the coughing started. A month later and he’s still waking up coughing 1-2 times per night. I’ve tried homeopathic remedies, have a humidifier in his room, and religiously slather Vick’s on his feet covered with socks each night, and he still coughs. He starts off elevated, but slides down in his bed and the coughing begins. At first I would go in and help him through the cough and go back to my bed, but now I’m getting sick, so often pass out in his bed for a few hours, sometimes for the rest of the night.

When I woke up this morning I exaggerated my disappointment and began crying and saying “How did I get here? I’m in the wrong bed!” JW reassured me that I was okay, but I’m not. I’m sick. I’m tired. I’m sick and tired of being sick and tired.

Here’s an example of my typical sleepless night as of late:

So why is this a universal, worldwide conspiracy? There are some nights when I go to bed feeling really good that “This is going to be the night that I get a full, restful night’s sleep.” JW is tired and goes to sleep easily, Baxter has had plenty of water and pooped after dinner, my husband goes to bed at the same time as me and I pass out with no problem. Surely I’ll sleep tonight! Nap time is not immune to this conspiracy as illustrated in these other things that have kept me up either during the night or during nap time:

Now people tell me that I’ll sleep again once JW is 18, but then I’ll be up worrying about him anyway. I sure hope “they’re” not right like they were the last time.

Don’t even get me started on the Universal Worldwide Conspiracy for Mommy Not to Poop!