I love making things. Even though I know this, whenever I’m asked to write about myself I have a hard time describing what kind of things I like to make.  I love to cook, I like playing with a sewing machine (but I’m not good at it!), and I like making messes.  That’s the kind of making stuff-crafty I am – the mess kind.

I stumbled upon Perler bead crafts when I was searching Etsy for Link and Zelda for a special someone’s Valentine’s Day present. I found these, but I couldn’t just hand my Zelda-loving boyfriend a set of Perler bead figures, so I put them in a shadow box. They looked lonely, so I looked around to see how easy it was to actually create with Perler beads. You can find them at craft stores and the single color sets are about $3-5 dollars for 1,000 beads, which lasts forever if you’re doing small projects. I’d recommend that you get the tweezers they sell, as well as a board to assemble them, and an iron. They sell buckets of mixed colors too.

This was the final product. 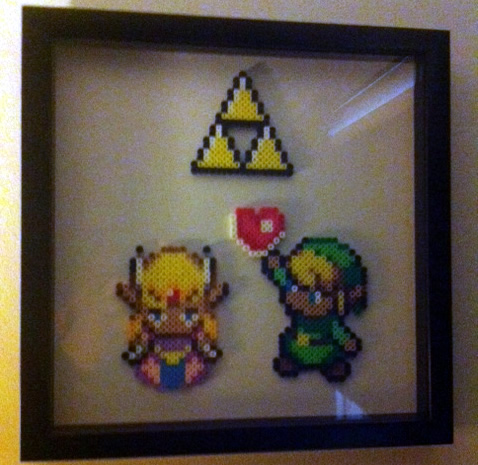 Now, my inner geek is in love with Harry Potter. So for fun (which is also another way of saying that the semester had just started and I still had something resembling free time) I decided that I needed a set of Harry, Ron, and Hermione. You can easily Google image search for Perler bead + whatever character or image you want to make, and lots of the results will have enough detail to use them as a pattern. I didn’t love any of the results though, and if you really think about it, unless you can find an original post on a blog encouraging you to make it, you might be stealing someone’s design. I decided to purchase this cross stitch pattern and create it with the beads. The shop has lots of amazing patterns, though I don’t know how to cross stitch – yet.

I made a few changes to the colors of Harry, Ron and Hermione, and then added a few highlights. Still, the completed figures sat on the desk in our dining room for months. Literally, from February until this past week. A friend of mine was helping to organize a fundraiser, and they were looking for donated artsy goods to auction/raffle. I classed up the figures using a shadow box, some matting, and foam mounting dots to give them added dimension. 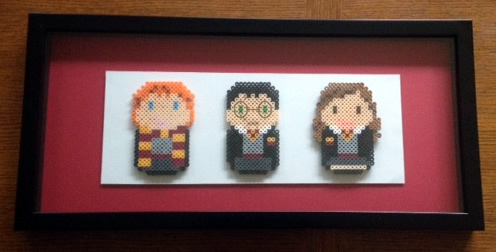 I love them! If I was better at lettering I would have added a Dumbledore quote about friendship or love.

So in conclusion, Perler beads can be super fun and relaxing, especially if you somehow missed playing with them during your own childhood. They say ages 6+ but my six-year-old definitely doesn’t have the patience or fine motor skills to complete a project with them. I could see a dedicated slightly older child having fun for hours. They’re not inexpensive, but if you use your Jo-Ann’s and Michaels coupons it becomes more affordable. This would especially be the case if you were to buy just one item you needed every week or so until you had enough to complete your project.

Did you play with Perler beads as a kid? As an adult? Do your kids like them?