Every Mom Should Own a Tool Box! 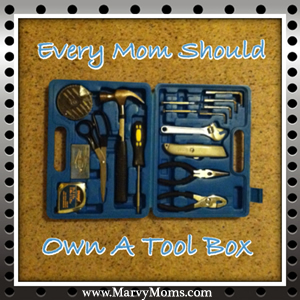 So, I was taking the batteries out of a puzzle that Sophie got for Christmas. You know, one of those annoying, won’t-name-names brand of puzzles that are light sensitive? When every time you walk by it a monkey howls or a cow moos at you? Yeah, now you know why I removed the batteries. Real funny GRANDMA! Anywho, I thought to myself, every mom really needs to own a tool box.

A little background—I bought my first tool box when I was 17 years old before I went to college. It was $10 at the local dollar store joint. I don’t know if I just had more common sense than the usual teenager, but when I go to my dorm room, I was the only one who had one. No joke—every girl down my hall came to my room that first week to borrow some sort of tool.

That being said, I still have my trusty ole $10 tool box. Sure, I am missing a screwdriver (no thanks to a screwdriver of an ex-boyfriend) and a latch on the outside (no thanks to the husband), but I use it all the time.I suggest that every mom have a tool box in her arsenal of mom stuff. Be it for putting a nail in the wall to hang up that beautiful baby picture in the nursery, putting together that 289,734 piece plastic kitchen for Christmas, or taking batteries out of an annoying puzzle, it willcome in handy!!!

Make sure it has the following:

Hammer: Pretty self explanatory, but even those most obvious things need to be mentioned!

Screwdrivers: You usually get one in a tool box, but make sure it has an interchangeable head. You don’t need a bunch of randomly sized Phillips and flat heads laying around. My box actually comes will a little box that holds the heads, so that is handy. Mine also has tiny screwdrivers in it—used for, again, taking batteries out of annoying toys.

Allen wrenches: For those companies who think it is funny to give you random-shaped screws…

Needle/Long nose pliers: These guys will come in handy at random times, like when you need to twist off a plastic piece of something, fix a piece of jewelry, or when reaching behind the couch to grab that stinkin’ crayon that is just an inch too far out of your reach.

Wrench:Just when you think that you have enough assembling/disassembling tools, this makes it a trifecta. For those toys that have nuts and bolts (I can only think of a bike at the moment… brain fart), you will need a wrench.

Measuring tape: I probably use this guy the most. I love to measure! (nerd alert) But seriously, it helps room plan when your kid wants to rearrange their room for the 36th time, or it keeps your kid occupied for a few minutes (mine could pull it out and let it snap back in all. day. long.).

Scissors: It may sound silly to keep this in a tool box, but mine came with it. I usually use it on tougher stuff (thin metal wire, zip ties, thick plastic, etc.) so if it damages the blade, I’m not too concerned.

Flat Blade: When you need to rip open that stinkin’ cardboard box that your precious kid’s toy came in.

Fasteners:Nails, screws, drywall screws, picture hanging thingers (pardon my advanced technical terminology). Any time I take a picture down or remove a screw, I put it in the little box inside my tool box. Reduce, reuse, recycle, right?

Well, I hope I have convinced you to own a handy little box of your own! 🙂