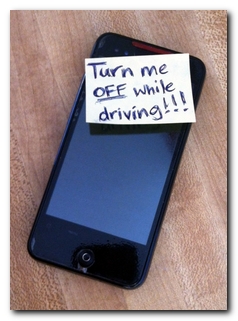 One of my biggest pet peeves of driving, besides people not using their blinkers, is talking and texting while driving. Do people honestly forget how dangerous this is?!

When I worked for an insurance company, I had about a 27 minute drive to work. I took back country roads to get there and you would think there would not be a lot of people on them. Wrong. I passed a lot of people commuting county to county and I would wager a guess that at least 30% of them, every morning, were driving and talking on the phone. One day, I decided that every time I passed someone doing it, I would honk at them. It made me feel better for about 14 seconds until my common sense kicked in and it said “they are already distracted, probably not a good idea.” Therefore, I do not recommend honking at people on their cell phones. But, my anger did not subside, and it still hasn’t.

Now that I am a mom, it has made me even more angry. Who do these people think they are putting my innocent baby in jeopardy just to take a phone call reminding them that their DVD is due back at the rental shack?!

Now I am going to be completely honest with you. I have texted while driving and have taken phone calls. But, this was before I was a mom. I made a promise to myself and Sophie that I would no longer be ignorant and think that I was above the law and keep doing it. That text asking me what I want for dinner, or that automated credit card collections call for some guy who is clearly not me, can wait until I am at a complete stop and my car is off.

I just wish that people, even those without kids in their vehicle, would do the same. So many people have been injured or died from being too attached to their electronic devices. What ever happened to turning the phone to silent and just singing along to the radio? And how in the world did our parents survive when all they had were land lines? Ya know, those phones with a cord and were stuck to a wall?

Just remember that the average time to check a text while driving is 5 seconds. That is 5 seconds with your eyes off the road. At 55 MPH, that is the length of a football field. I could continue to bore you with statistics and the such, but you don’t need those to know it is dangerous. Please remember you are setting an example for your kids and anyone else that rides in your vehicle.

OK. My rant is over for now. But please think twice. It only takes one text or one phone call.